This project started in 2015, and the main objective is to find out the extent of the gender gap on the Internet, to reveal the uses of the Internet by Egyptian women, and to identify the obstacles and threats they face in accessing the Internet and social media.

The study was conducted in poor urban areas within Greater Cairo in Cairo Governorate (Helwan), Giza (6 October) and Qalyubia (Shubra El-Kheima), and the number of participants in the survey sample was 1000 participants (750 females and 250 males). The target age group in this study was from 18 to 60 years.

The results of the study were announced and its report was issued on December 6, 2015 in conjunction with the 16 Days Campaign Against Gender-Based Violence 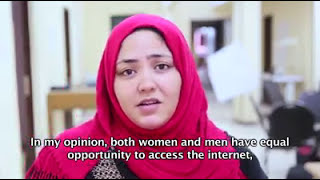 Safety in Home for Safety in the World; Making Education Safe for All