The Task Force consisted of 9 organizations working in the field of women’s rights: the New Woman Foundation, Nazra for Feminist Studies, the Foundation for Egyptian Women’s Issues, the Cairo Center for Development and Law, the Women and Memory Forum, the Nadeem Center for Psychological Treatment and Rehabilitation for Victims of Violence, the Center for Appropriate Communications for Development, The Egyptian Women Lawyers initiative and Tadwein for Gender Studies, aims primarily to demand the adoption of a unified law to stop violence against women.

As the current Egyptian procedures and legislation seem insufficient to protect women from violence. Instead of scattered articles in the Penal Code that define violence only, we believe that the adoption of a unified law criminalizing all forms of violence against women, linking violence in the public and private spheres, and providing for measures to protect survivors, is the first step on the right path.

Today, the nine organizations released their founding statement to launch the proposed bill and emphasized that as long as violence against women continues, we cannot claim that we are making real progress towards equality, development and peace. And states have a duty to protect women from violence, hold those responsible to account, and provide justice and redress to victims. Ending violence against women remains one of the most serious challenges of our time.” Report of the Secretary-General of the United Nations 2006 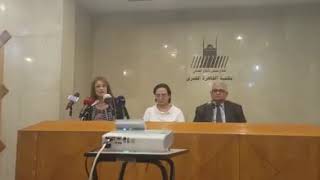